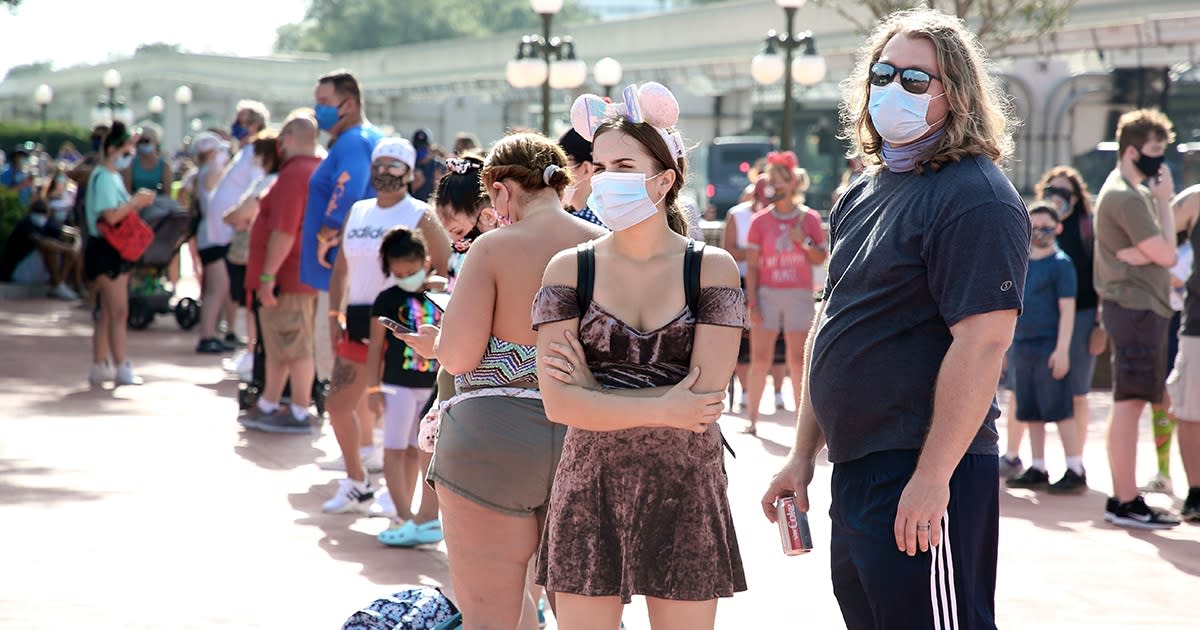 Florida reported 11,433 new COVID-19 cases and an additional 435 hospitalizations the day prior to Disney World reopening

For the first time in nearly four months, Walt Disney World’s Magic Kingdom and Animal Kingdom reopened today in Florida — despite the COVID-19 hotspot recording an additional 11,433 new coronavirus cases and 435 new hospitalizations in a single day, the state’s largest single-day increase. As for the death toll in Florida, that surprised 4,100.

The soaring cases didn’t stop theme park-goers from visiting, though. Reopening day not only saw increased cleaning between rides and hand sanitizer stations installed throughout the park, but also long entry lines, crowding, and, according to one theme park journalist, “absolutely no distancing.”

“This is not OK. This is not OK,” journalist Carlye Wisen said, as she showed the long lines at entry and the lack of distancing among guests.

adding video to explain the full issue, which is more than just the above line.

there were also TWO MORE lanes of pedestrian traffic in the SAME walkway.

It’s not a fluke, either – we were directed straight into the bottleneck. (You can hear it in the background.) pic.twitter.com/nhSB3o8gXm

“Because Twitter is Twitter, I want to add here that the onus is on the park, not the guest. This is not their fault. This is an unexpected problem and bottleneck that is not being fixed quickly enough,” Wisen wrote. “I’m sitting here, and there’s still no effort to enforce social distancing. This is not a ‘gotcha’ photo; this had been happening for a WHILE and remains this way as I sit outside the park.”

Prior to reopening, Disney implemented a slew of new safety protocols in an effort to protect guests and employees, including mask requirements, social distancing, hand-washing and hand sanitizer stations, and temperature checks for guests and employees upon entry. Disney also put “high-touch” experiences such as meet-and-greets on hold, among other changes.

Disney World is back open today. There are lots of new changes though
-All visitors and employees must wear masks
-No hugging Mickey/Mini characters
-There are 4,000 hand-sanitizing stations now pic.twitter.com/Slv7DKfRrW

Cleaning isn’t taking place in between each loading at Avatar Flight of Passage in Disney’s Animal Kingdom. Empty hand sanitizer dispensers lead to crowding at the next available dispenser pic.twitter.com/KtB6Rsglms

Disney won’t, however, offer its park employees COVID-19 tests. According to Variety, multiple sources have told them that the company-provided insurance covers testing, though, should cast members seek it out on their own.

“It may be different from the last time you visited,” Disney says on its website. “But together, we can find new ways to create magical moments-and memories to treasure.”

Visitors are also required to make reservations in order enter the park, and tickets for the month of July are already sold out.

“This phased reopening will demonstrate a deliberate approach, with limits on attendance and controlled guest density that aligns with guidance on physical distancing,” Disney said in a statement in late May.

While some applaud Disney Parks for how they’ve handled the reopening of their parks, so far, many others are criticizing the Disney’s decision to invite hoards of people back into their parks as COVID-19 cases continue to increase, particularly in a state that recently extended the state of emergency another 60 days.

“There are several hospitals that are running out of beds in Florida, with health workers warning that there are not going to be enough ventilators and enough rooms, and cases in the state are breaking new records daily,” Dr. Anne Rimoin, a professor of epidemiology at the UCLA Fielding School of Public Health and the leader of the UCLA COVID-19 Rapid Response Initiative, tells Variety. “Moving forward with reopening, I think, is inviting disaster. I’m not sure that’s what the world is looking for right now.”

“It just seems like a very irresponsible thing to do,” Rimoin later added.

At least 54 hospitals have run out of ICU beds in Florida, with health workers warning: “we won’t have enough ventilators, enough rooms.”

The state broke daily new case records over the weekend, but is still moving forward with reopening schools and Disney World. pic.twitter.com/0L6gnrJkfx

I told my husband Disney World is now open. He choked on his coffee. He’s an ER doc.

Craig Williams, producer for The DIS Unplugged Disney podcast, however told CNN that “it feels safer at the theme parks because they’re putting in that extra effort.”

“We feel safer at theme parks than we do at any other normal store or restaurant,” Williams said, adding that the “extra effort” is more visible at Disney than he’s seen at other theme parks that reopened in the past month. “It really blew away that everyone was following all the rules, so I wasn’t expecting that.”

And, a Disney Park-goer recently told NBC News that “everybody is just so excited” to be back at the park. So much so, the cast members lined up and clapping on Main Street at Magic Kingdom on Saturday morning moved her to tears.

“It was very emotional,” Diane Watkins, a preschool teacher from Helena, Alabama, said. “Hot or not, mask or not, we’re just happy to be here. I feel like everybody here is in the same frame of mind.”

Disneyland in California is still closed.

Information about COVID-19 is rapidly changing, and Scary Mommy is committed to providing the most recent data in our coverage. With news being updated so frequently, some of the information in this story may have changed after publication. For this reason, we are encouraging readers to use online resources from local public health departments, the Centers for Disease Control, and the World Health Organization to remain as informed as possible.

See the original article on ScaryMommy.com