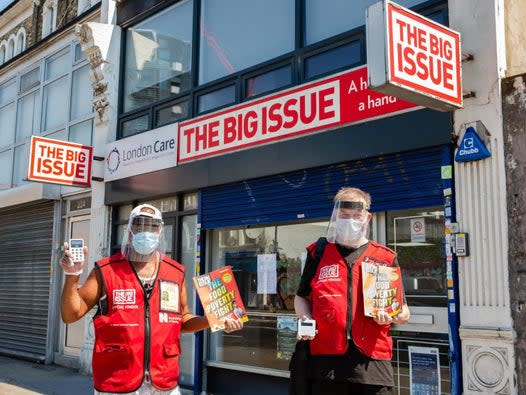 Big Issue vendors are set to return to the streets next week with personal protective equipment (PPE) and contactless payment card machines to help keep them safe during the coronavirus pandemic.

On 20 March, around 2,000 vendors were withdrawn due to the coronavirus lockdown but sales of the magazine have continued through subscriptions and at supermarkets and other stores.

Now, The Big Issue Group has announced that its sellers will return in England, Wales and Scotland from 6 July, supported by a health and safety plan of action which ensures they are able to sell the magazine safely and customers are able to buy with confidence.

As part of the new rules, sellers will be given access to PPE, including face masks, visors, latex gloves and hand sanitiser. They will also be provided with new bags for the magazines and contactless card payment equipment.

Some local sellers might also be asked to sell in a slightly different location than normal to ensure safety and the cover price of the magazine is increasing to £3, with half going to the vendors.

The Big Issue Group adds that any vendors who are in the vulnerable category or become ill with Covid-19 will be supported both financially and emotionally, until a time when it is safe for them to return to selling.

Lord John Bird, founder of the Big Issue said: “We want to thank everyone who has supported us and our vendors along the journey we have been through, the generosity of the wonderful British public, our corporate partners, investees, other social enterprises and charities, celebrities, the media and many, many more.

“These essential funds have meant that we have been able to support vendors while they have been unable to sell the magazine safely on the streets.

“The Big Issue exists to offer a hand up, and in keeping with that spirit our vendors are passionate about getting back to earning their own income and being in control of their own finances and lives once again.”

The Big Issue magazine, which was launched in 1991, provides homeless and vulnerably housed people the opportunity to earn a legitimate income by becoming a vendor.

Mike Danks, who usually sells the magazine in Finsbury Park, London, said the Big Issue has helped him to begin socialising and get his life back on track.

“The staff have also helped me a great deal to sort out my life, which seems to have fallen apart for a while,” Danks said. “I am excited to get out and about and meet people again and make contact.”

Will Herbert, who usually sells the magazine in Islington, London, also welcomed the move, adding that he misses his customers dearly.

“I had some really lovely customers and I can’t wait to see them. The Big Issue has provided us with the PPE kit to keep us all safe in this drastic situation we find ourselves in at the moment.”

In April, Sainsbury’s became the first major supermarket to sell the magazine to its customers online and in-store at selected branches.

Throughout lockdown, the magazine was also sold temporarily in-store at McColl’s, Martin’s and RS McColl. It was announced at the time that this measure would only continue until Big Issue vendors were able to return to safely selling the publication on the streets.