Long before the pandemic, Hawaii residents were already struggling to make ends meet by razor-thin margins. Between high costs of living and wealth inequality, not only living in Hawaii, but staying planted in Hawaii was a supreme test of endurance.

And then, early this year, the coronavirus found its way into Hawaii and turned everything we knew upside down. Even as infections started to spread and fears of overwhelming the health care system started to flash, many people and businesses didn’t want to shut down or stay home, even if it meant risking severe illness or death.

The desire to “open up, no matter what” is completely understandable. We’ve grown somewhat accustomed to the spinning hamster wheel economy of Hawaii, where sleeplessness is the highest in the nation, where individuals work multiple jobs, and where entrepreneurs have an all-or-nothing, bet-the-farm approach to staying in business.

Most claim that they are working for money, others say that they’re working for their children’s future, but I’ve always believed that for most of the local population, we’re almost working just for the sake of working. 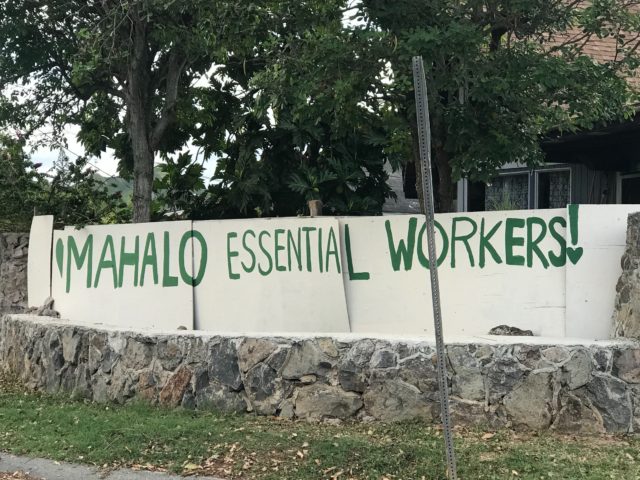 The truth is – and I wish my fellow conservative Republicans would get this – is that both locally and nationally, if the economy was really that great as some of us claim, not only would we be able to buy more with less, but most importantly, we would all have personal savings to fall back on, rather than constantly having to obsess over profits and consumer spending.

That, however, is all water under the bridge in October 2020. Electoral reprisals can come in November, but in the meantime, we still have the task of beating the coronavirus while also providing some kind of safety trampoline for our local population. When the government says you can’t work because it’s not safe, the correct action is for the government to provide for the population, not to force people to endanger themselves to provide for themselves.

Despite bungling the processing of unemployment claims and taking forever to figure out how to spend CARES Act money, the State of Hawaii is at last finally acknowledging the concept that the best way to help people is to put something in their hands that allows them to get what they need.

Last week, the announcement of a $75 million restaurant cash card program, which will allow some 100,000 unemployed residents to have cards worth $500 to spend as they please in local restaurants, was a good sign for struggling families. Not only does this allow hungry people to eat, it helps local restaurants to stay in business and pay employees. Since we won’t be getting a second round of economic stimulus this year, every little bit of help that locals can get will make a big difference.

This being said, our local government needs to do so much more to help local people. Unemployed people are not the only ones who need help in Hawaii; there are many people who are at work now but couldn’t work for weeks who had to eat into their savings to pay the bills and continue to buy food, clothes, cleaning supplies for COVID-19, and many other vital needs.

One thing that our state and county leaders should consider is the possibility of negotiating for all Hawaii residents some kind of statewide discount program that covers certain products or classes of services. As it stands, whenever the state engages in procurement of certain items for official business – say for example, computers, office supplies, gasoline, even furniture – a Price & Vendor List Contract exists where these things may be purchased at a discount rate.

Our local government needs to do so much more to help local people. Unemployed people are not the only ones who need help in Hawaii.

The idea behind this concept is that businesses that are part of this arrangement are able to get regular customers and those who use their services are given preferential prices. If a similar arrangement were made on a statewide scale for all locals to get groceries, clothing, household goods and so on at a discounted rate, this would stimulate the economy by giving locals incentive to buy cheaper products, and it would help businesses see more customers.

Say for example that a single mother needs to purchase a laptop for her daughter to take classes online. Instead of her needing to spend hours looking for the best possible deal, she could just refer to a negotiated “kamaaina list” provided by the state and go with a certain local company that has agreed to provide laptops of a certain class of specifications for a fixed, discounted price.

The same could apply to residents for purchasing fruits and vegetables, disposable paper masks, toothbrushes, blankets, or anything else they might need on the list. All one would have to do is show their current Hawaii driver’s license or state identification card, and voila, they could buy whatever they needed. This is an idea that our local government should strongly consider.

It’s not clear how long the economy will be affected by the continuing pandemic, but in the meantime, having the ability to purchase necessities at low prices will be critical for our local population. If I had my way, the entire CARES Act money given to Hawaii would have simply been converted into helicopter bailouts for locals, but since that day will never come, at least find a way to lower the cost of the things we need most in the islands.

Sign up for our FREE morning newsletter and face each day more informed.

The Pros and Cons of hiring a family member