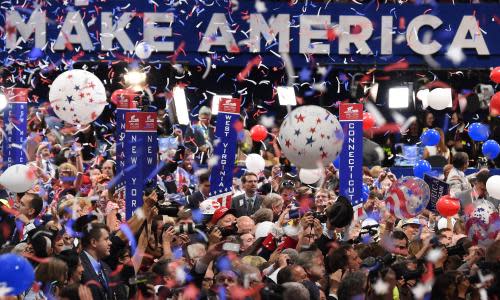 Every four years, Democrats and Republicans stage their national conventions, huge primetime events at which presidential nominations are formally bestowed amid cascades of balloons, in front of cheering crowds.

On 20 August, a little more than two months before election day, Joe Biden will duly accept the Democratic nomination in Milwaukee, Wisconsin. A week later, Donald Trump will be crowned by Republicans in Jacksonville, Florida.

Thanks to the coronavirus pandemic, almost everything else will not proceed as usual. But the two parties will follow radically different paths.

This week, as the US death toll passed 124,000 and cases surged in many states, Democrats announced a slimmed-down convention, mostly online and with physical events staged under guidance from public health experts. Biden’s speech, for example, has been moved to a smaller venue.

Republicans have also made big changes, but for a different reason. Despite the pandemic racing through America, they are attempting not to sacrifice spectacle in the name of public safety.

The Republican convention was set for Charlotte, North Carolina. But Roy Cooper, the Democratic governor, would not allow what is in effect a huge campaign rally – crowds packed tight in a sports arena – in the shadow of Covid-19.

As a result, party business will be conducted in Charlotte with public health restrictions but Jacksonville will now host made-for-TV events not subject to mandatory social distancing, mask-wearing or other measures.

In Wisconsin, Democrats are working with Tony Evers, a governor from their own party who has sought to prioritize the fight against the virus. In Florida, the governor, Ron DeSantis, is a prominent Trump supporter who has championed economic reopening.

Tara Setmayer, a Republican operative and Trump critic, told the Guardian: “The simple version of why lots of people will be brought into Jacksonville in the middle of a pandemic is this Republican need to appear committed to reopening and not to mandate safety measures.

“Everything that the Republican party does now is a play for the base. There’s no other logical explanation because the Democrats have had enough sense to make the proper adjustments and go virtual, to adhere to the government’s own standards for social distancing and things like that.

“There’s a lot involved logistically to control a national convention. It costs tens of millions of dollars. You bring in multiple police agencies to coordinate. It’s a Herculean effort.”

“So the Democrats understood it’s not worth risking the health and exposure of all these people and the logistical nightmare you would create. Whereas Donald Trump and the Republican party seem not to give a damn about the health and safety of the people involved. And that is incredibly self-centered and politically craven.”

But it may be politically necessary for Trump. Heralding the decision to go to Jacksonville, the Republican National Committee chair, Ronna McDaniel, cited the economic benefit to the city but also pointed to the hard political realities that govern any choice of convention location.

Florida, McDaniel said, “is crucial in the path for victory in 2020”.

Four months out from the election, the Center for Politics at the University of Virginia rates four states as toss-ups between Biden and Trump: Arizona, North Carolina, Florida and Wisconsin.

Trump won them all in 2016 and in all likelihood will have to do so again. Much can change but by the UVA count, excluding the toss-ups, Biden has 268 likely electoral college votes to 204 for Trump. A candidate needs 270 to win.

“Florida’s a must-win but so’s North Carolina,” said Larry Sabato, director of the UVA Center for Politics. “Lose either, and Trump’s probably lost the election.”

The Democrats’ choice of venue was governed by similar political concerns, but their outlook now looks much brighter.

“Wisconsin looked like the pivot state,” Sabato said. “There’s always one. If it goes one way then Trump wins, if it goes the other way, then Biden wins. So that’s why the Democrats put it in Wisconsin. It was one of the great shocks of 2016. They figured they could get Michigan back without doing a convention there and I think they were right, and the same with Pennsylvania.

“Wisconsin was the tough one – they thought.”

As it turns out, as June rolls into July polling averages put Biden ahead nationally and in most battleground states. Realclearpolitics.com, for example, has him up 49% to 41% in Wisconsin and 50% to 44% in Florida. North Carolina is closer, Trump trailing by one point. But where it offers 15 electoral votes, Florida has 29.

In Trump’s camp, one poll may cause special concern. A poll of Jacksonville residents by the University of North Florida found that “58% strongly or somewhat opposed” hosting the Republican convention and 71% were “very or somewhat concerned … about Covid-19 transmission”.

Such concern can hit turnout. Last weekend, Trump returned to the campaign trail in Tulsa, Oklahoma, a city and state badly hit by Covid-19. The rally attracted a small crowd and staffers tested positive.

The Florida poll also found 61% of respondents were concerned about protests and social unrest. Amid national protests over police brutality and structural racism, Trump’s speech in Jacksonville on 27 August will fall on the 60th anniversary of Ax Handle Saturday, the day in 1960 when a white mob attacked civil rights activists in the Florida city.

Setmayer and other observers point to the insensitivity of such timing. However, Dr Michael Binder of the University of North Florida noted that conventions are by their nature “polarizing events” and said that “under the backdrop of a global pandemic that appears to have come more fervently to Florida, the opposition to this event being hosted locally seems much more concerning”.

The two would-be presidents are not the only people who will be watching the polls into August. Sabato said polling in North Carolina showed support for Cooper in his confrontation with Trump. Setmayer pointed to a fall in support for Jacksonville’s mayor, Lenny Curry, since the Republicans announced they were coming to town. DeSantis is widely said to be eyeing a presidential run in four years’ time.

Last month, Politico reported on how Trump attended George HW Bush’s nomination in New Orleans in 1988, saw how Republicans lionized him as, as Sabato put it, “a hero of history”, and told friends: “This is what I want.”

In Jacksonville, he will demand such a spectacle. McDaniel, the party chair, has promised “a packed arena” and all the trimmings: balloons showering from the ceiling, bands, chants of the candidate’s name and the familiar mantra: “Four more years!”

As public health officials continue to warn against large gatherings, particularly indoors, McDaniel has also promised “to make sure the convention-goers are safe”.

But case numbers continue to surge in Florida. On Friday, DeSantis both announced a record daily caseload and finally ordered a pause in reopening. It is hard to see the situation being much better by August.

“I just really don’t see the upside in the long term for Donald Trump,” Setmayer said. “He’ll personally get his adulation fix, but that’s all it’ll be.”