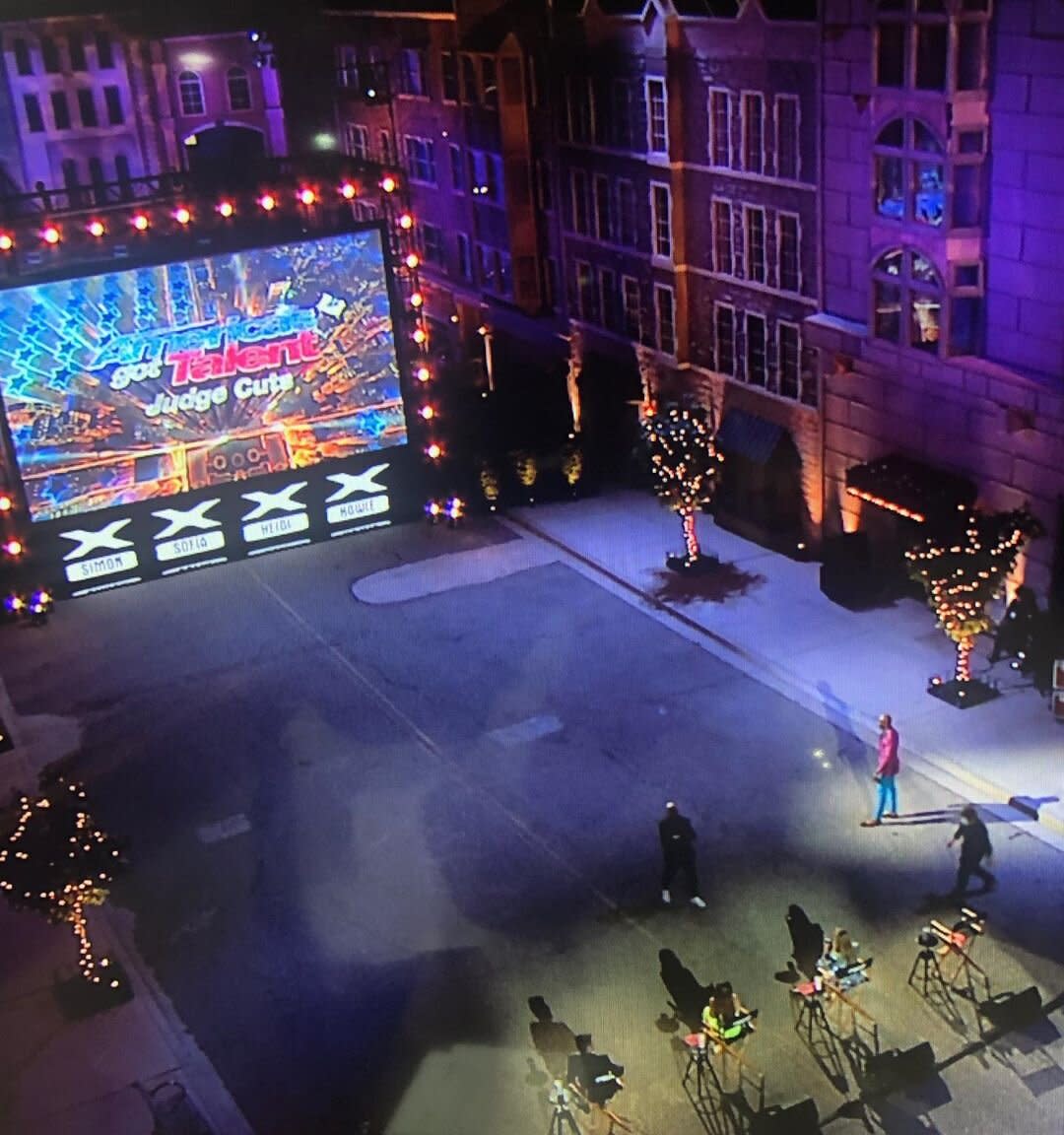 America’s Got Talent resumed production after a weeks-long hiatus, becoming one of the first major shows to figure out how to move forward with taping amid the coronavirus (COVID-19) pandemic.

On Tuesday, audiences were taken back to the final auditions, which were filmed in March without a live audience. The back-half of the two-hour episode was filled with online submissions after producers reopened the audition round.

As the NBC series navigates the next steps, executive producers Sam Donnelly and Jason Raff tell PEOPLE about juggling the unknowns and how they were able to film the competition’s next round on an outdoor set inspired by a drive-in theater right after pandemic restrictions were lifted in California.

“It feels really weird looking back at it now from where we are today. But it was a very, very interesting time to just see how day by day everything was changing,” Donnelly says, looking back on the show’s halted production in March.

“We stopped early. So we had a lot of acts that were planning, getting on planes, or trying to get on planes to come audition. And a lot of the big groups couldn’t do it. We had said you could audition this year, who couldn’t audition,” he says, adding that online audition submissions were the solution to their problem: “Let people send in some videos for a couple of weeks and let the judges decide because we didn’t properly get to finish the audition season.”

RELATED: Simon Cowell on How AGT Will Move Forward amid Coronavirus — and What to Expect in Season 15

And during the quarantine period, when being on set was impossible, Donnelly says they spend most of their time prepping the rest of the season. “In lockdown, we were really lucky that we managed to get the shows edited. When we saw what was happening, we were like, ‘Okay, we’re going to have to get remote editing stations for our editors to work. And we have to get them flown out of New Jersey,’ ” she recalls. “New Jersey was just about to be locked down as well. We had a really nervous 24 hours when we were waiting to hear whether our cargo on the plane had managed to leave. ‘Are we going to get the show edited?’ was based on whether we got our equipment to our editors in their homes.”

While awaiting their May 26 premiere, Raff says they were watching rival competition shows to see what format had been adopted in response to the global health crisis. “The Voice or [American] Idol, they did amazing things with what they could at the time. We did have a little more time than they had,” he says, explaining that AGT wanted to make the next rounds “more than just another Zoom show, which is what people in the industry were calling them. All these shows trying to survive on Zoom interviews.”

In mid-June, California lifted the restrictions on film and TV productions, allowing AGT to execute the “dozen different scenarios” they had prepped. “They set out a bunch of guidelines and by the next day we were beginning, we were one of the very first production to actually film,” Raff explains. “We just pulled the trigger on the one [plan] that we could do at that time, because we had to shoot that week, or it was going to be very difficult to make it air on time. … The state, along with the union, set out very clear guidelines and procedures that we could understand and follow.”

Production took place in Simi Valley, California, on a drive-in theater set, with judges Simon Cowell, Heidi Klum, Howie Mandel and Sofia Vergara watching some contestants on a big screen and speaking to them live from the places they were.

“The drive-in idea is one that came organically because, at the time, you’re just reading about drive-ins,” Donnelly explains. “We liked the idea of being outside on a movie set location. Having the judges outside, socially distanced, but in a way that didn’t feel really weird. It felt like a good solution.”

RELATED: Heidi Klum Details Emergency Exit from AGT After Falling Ill — and Why She ‘Couldn’t Tell Anyone’

Backstage, there was regular testing, and producers created pods assigned to specific zones where everyone adhered to social distancing. When they needed to interact with anyone in another zone, they talked using headsets and phones. On stage, the judges and host Terry Crews wore face masks, except when they were talking on camera, and contestants were placed in respective pods. “It’s really the health and safety of the crew and the contestants that has become our primary job at this point, along with producing a television series,” Raff says. “The testing is a huge component of it. The zones are a huge component of it. We all had our own workspace.”

Donnelly adds, “It was just different, unfortunately. We liked the Judge Cuts where everyone comes back and gets to perform again for the judges. That wasn’t possible this year. So, we adapted the format.”

The singular Judge Cuts episode, in comparison to the four episodes in seasons past, airs on July 28. (To space out the rest of the season, a best-of auditions episode will air on July 21, and a 15th anniversary special will air on Aug. 4.)

“It’s been invigorating in one way that it’s really forced us to be more creative with things. When you’re in a format that you’re familiar with and you know it’s successful and it works, sometimes it needs something to really force a change,” Donnelly says of the season 15 format. “We didn’t have a choice, we had to do things differently. There was definitely something exciting about doing it and doing it differently. Trying to always do better has actually been, for me personally, a very exciting part of this whole time.”

Along with the contestants, who were happy to be competing again, the judges and the production staff were relieved to continue filming as “it was the first time some of them have seen another human being besides the people they were quarantining with,” Raff jokes.

“Everyone was so happy to be together again, working. And a lot of the crew said they felt safer than at the supermarket,” he says of the safety guidelines on set. “There are so many protocols in place between the testing, how you work and the filming. Everyone felt really safe, happy to be making the show that some of them have been doing for 15 years now. There was a great feeling to get back and to figure it out.”

The judges and crew tested negative for the coronavirus on set, but one contestant did test positive before production resumed. “We were extremely lucky that nobody that we know of became sick. We did have one contestant.,” Donnelly says.

Raff adds: “No one on the crew, which is again remarkable knowing what we know now, because we had acts coming from all over the country.”

The round after the Judge Cuts, called the live shows, is set to start on Aug. 11 and will showcase 44 acts performing over four weeks of quarterfinals, compared to the usual schedule of 36 acts appearing over three weeks. “Because we’re being forced because of COVID to do less with the middle round, we felt that it would better to put more people through into the live shows that America could choose. We wanted to try and do as much as possible to give everybody as much of a chance as possible,” Donnelly explains.

Though AGT figured out a way to film the Judge Cuts, producers have yet to nail down a plan for the live shows.

“I think the hardest thing was, and continues to be, that the world is constantly changing. Something could happen tomorrow that we might not be able to continue. Who knows?” Raff says. “The uncertainty of everything has been difficult for us all to get through our personal lives and difficult for us to get to what this show is.”

The contestants, however, are more “passionate” than ever to put on a show. “I think that’s to do with the fact that, for many of them, this is the focus of their everyday life right now,” Donnelly says. “Many of us, our lives are on hold for the moment. It seems to me that this year more than most, they’re very passionate about the show and really putting everything into it.”

America’s Got Talent airs Tuesdays (at 8 p.m. ET) on NBC.