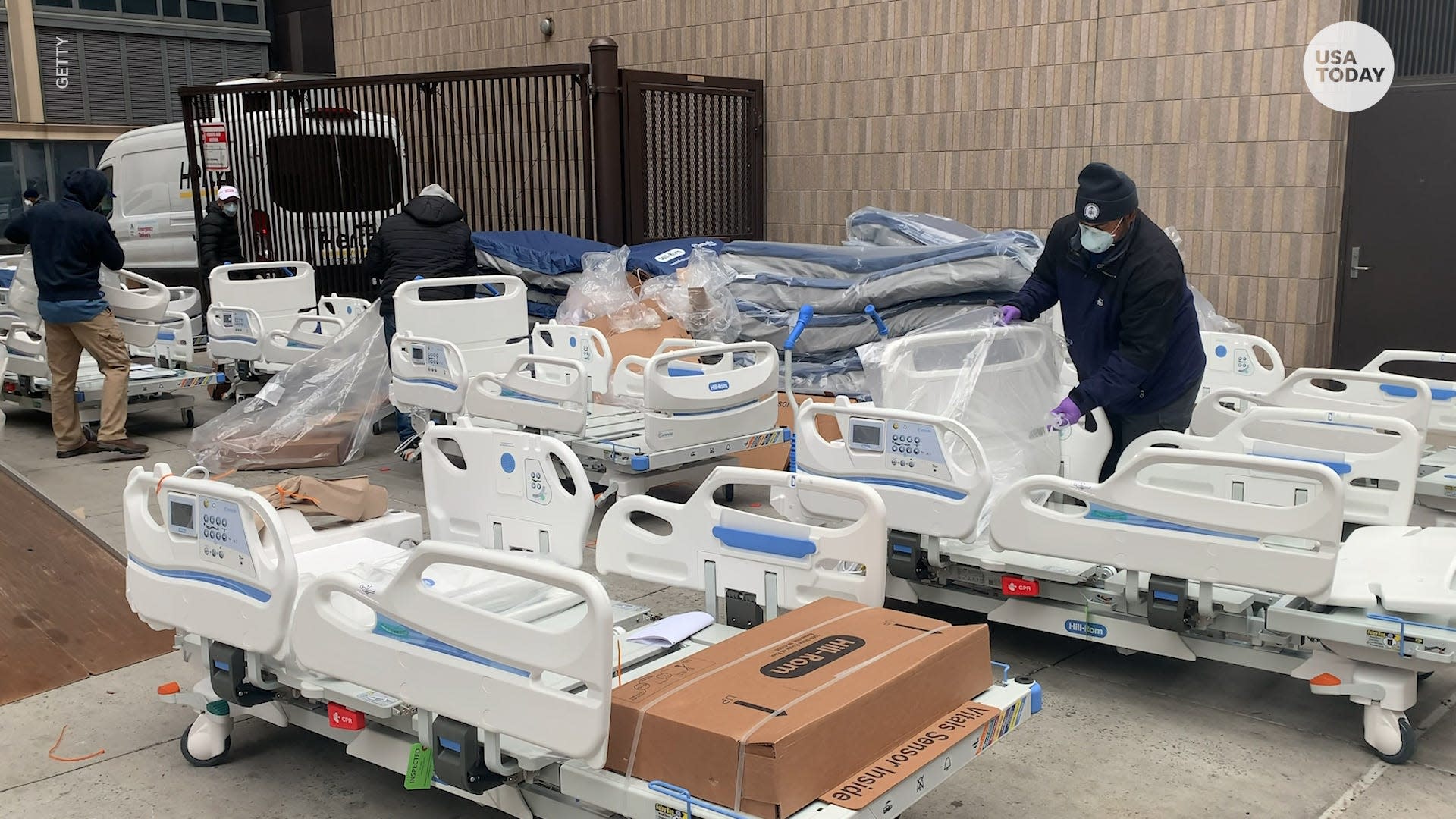 The U.S. coronavirus death toll has surpassed 130,000 but a U.S. pharmaceutical company says it could have initial doses of a drug ready by the end of summer that could treat or even prevent COVID-19.

A $450 million federal contract awarded Regeneron Pharmaceuticals could help get the drug to “many people quickly, hopefully helping to change the course of this deadly and still-raging pandemic,” the company said in a statement.

The news comes as confirmed cases surge across most of the U.S. – Dr. Anthony Fauci said the country is “still knee-deep in the first wave of this.” Arizona is one hot spot: The state surpassed 100,000 cases Monday, and more than 62,000 of the 101,441 reported cases involve people younger than 44, state officials said.

In Florida, another hot spot, the fall semester begins next month for public schools. The state’s education chief ordered school boards to “open brick and mortar schools” at least five days a week for every student.

Here are some recent developments:

📈 Today’s stats: The U.S. has seen almost 3 million confirmed cases and more than 130,000 deaths, according to John Hopkins University data. Globally, there have been 11.6 million cases and almost 540,000 deaths.

📰 What we’re reading: Hundreds of millions of dollars has gone to COVID-19 contractors accused of prior fraud. Those contracts ranging from masks and medical equipment to janitorial cleaning, video productions and even ferryboat services.

Our live blog will be updated throughout the day. For first-in-the-morning updates, sign up for The Daily Briefing.

Drug to treat, prevent COVID could be ready by end of summer

New York state-based Regeneron Pharmaceuticals said Tuesday it has won a $450 million federal contract to manufacture and supply REGN-COV2, the company’s antibody cocktail that could begin rolling out “as early as end of summer.” The drug is deep into clinical trials as a treatment and for prevention for COVID-19 infection. The contract will finance manufacturing so the drug can be made widely available in the United States if clinical trials are successful and the drug wins the FDA’s blessing.

“We made the decision early on to begin large-scale manufacturing at our own risk in order to ensure that product would be available immediately,” said CEO Leonard Schleifer.

“We want to ensure that our hospitals continue to have the staffing necessary to save lives,” the mayor said. Beaches, office buildings, retail stores and grooming services will remain open “for now,” the mayor said.

Federal purchasers have rushed out more than $16 billion in coronavirus contracts ranging from masks and medical equipment to janitorial cleaning, video productions and even ferryboat services. A USA TODAY investigation of 15 of the largest and hardest-hit states found hundreds of millions of dollars in non-competitive awards went to vendors that have been accused of defrauding taxpayers. Nothing in federal law prohibits it as long as they are still considered “responsible” and aren’t suspended or debarred from doing business with the government.

But under President Trump, where federal contracting officials have seen their workload increase nearly fivefold, taxpayers are “particularly vulnerable because this administration has diluted the oversight functions,” Steven Schooner, who served as a career official in the Clinton administration procurement policy office, told USA TODAY.

Dr. Anthony Fauci: US is ‘knee-deep’ in first wave of coronavirus cases

Dr. Anthony Fauci, director of the National Institute of Allergy and Infectious Diseases, said Monday that the United States’ handle on the coronavirus outbreak is “really not good” and that action is needed to curb the spread. In an interview via Facebook Live, the nation’s top infectious disease expert said, “We are still knee-deep in the first wave of this. And I would say, this would not be considered a wave. It was a surge, or a resurgence of infections superimposed upon a baseline.”

New cases in the U.S. have reached record highs, climbing to around 50,000 a day. Fauci, speaking online with the National Institutes of Health, linked some of the surge in new cases to some cities and states that may have reopened too quickly.

A coronavirus outbreak in the California Legislature has indefinitely delayed the state Assembly’s return to work from a scheduled summer recess. Assembly Speaker Anthony Rendon’s office confirmed five people who work in the Assembly have tested positive for the coronavirus. They include Assemblywoman Autumn Burke, who is believed to have contracted the virus while on the Assembly floor last month.

Rendon said Monday the Assembly will stay in recess until further notice. He said the decision is to protect lawmakers, staff and the public. The Legislature shut down for nearly two months earlier this year during the pandemic.

Caesars Entertainment CEO Tony Rodio told employees in an email Monday that they could be fired for not wearing a face mask, KSNV reported. “We are working to achieve 100% compliance with guests, but we must take strong action if team members violate the rule to always wear their masks at work except when eating or drinking. Please take note, the failure to wear your mask at work will be grounds for termination,” the letter says.

Many Nevada casinos reopened June 4. Gov. Steve Sisolak then mandated face masks in public for residents and tourists on June 24. The state has over 22,000 confirmed cases  and 439 deaths as of Monday, according to the Department of Health and Human Services.

Two major cruise companies have created a joint task force to try to find comprehensive solutions to the industry’s most vexing problem: how to keep ship passengers and crew safe from the coronavirus. Royal Caribbean Group and Norwegian Cruise Line Holdings together launched the “Healthy Sail Panel,” as it’s being called, with the goal of looking at every facet of safety, from whether ultraviolet lights can effectively kill the virus to how to improve meal service.

Some of the proposed changes might prove costly, like whether to modify ships to promote social distancing. And such recommendations could smack into the evolving nature of how to best fight the coronavirus, including how soon a vaccine might be on the way.

The Federal Emergency Management Agency denied multiple requests for a mega-COVID-19 testing site in Phoenix, according to Phoenix Mayor Kate Gallego. She said her office asked FEMA to implement a large-scale, drive-thru testing site — as they’ve done in other cities, including Houston — multiple times since the earliest days of the novel coronavirus pandemic.

She said her initial request came in April, but federal government officials told her that Phoenix’s case numbers were not high enough to merit that infrastructure. Now that Arizona has surpassed 100,000 known COVID-19 cases and is nearing 2,000 deaths, Gallego asked the federal government again.

“They said they’re trying to get away from that type of testing site … and they don’t want to open any new ones,” Gallego said. A spokesperson for FEMA did not respond to a request for comment.

Major League Baseball announced its season schedule Monday, making official a 60-game season that will begin on Thursday, July 23. Delayed more than three months by the coronavirus pandemic, MLB will attempt to become the first major sport to return to action with a pair nationally televised contests at 7:08 p.m. ET: the New York Yankees at the World Series-champion Washington Nationals and the San Francisco Giants at the Los Angeles Dodgers.

All teams, except the Yankees and National will be in action on Friday, July 24. Barring complications because of COVID-19, the regular season is set to conclude on Sunday, Sept. 27. Here’s the schedule.

Kanye West’s Yeezy brand borrowed at least $2 million from the government to stay afloat during the coronavirus pandemic, according to government data. The streetwear brand Yeezy LLC was listed as being granted between $2 million and $5 million from the Paycheck Protection Program meant to help small businesses keep workers employed during the COVID-19 induced shutdown. The revelation was made on Monday after the Small Business Association released a spreadsheet of all the companies that were granted more than $150,000 from the loan program.

Kanye West, who recently said he’s running for president and previously claimed to be a billionaire, started the company in 2007. The spreadsheet showed that the fashion company out of La Palma, California, would use the forgivable loan to save 106 jobs. At the end of June, Yeezy and Gap announced a 10-year deal for  “Yeezy Gap” apparel line.

More than a dozen kinds of hand sanitizer should be avoided because they may contain methanol, a toxic substance when absorbed through skin or ingested. The Food and Drug Administration says many of the products have been voluntarily recalled with other products being recommended for recalls because they may contain the potentially fatal ingredient. All of the products in the FDA’s latest methanol update were produced in Mexico.

The FDA says it has “seen a sharp increase in hand sanitizer products that are labeled to contain ethanol (also known as ethyl alcohol) but that have tested positive for methanol contamination.” The recalls come after the FDA warned consumers in June not to use nine kinds of hand sanitizers because they may contain the potentially fatal ingredient. Here’s the list.

An emergency order issued Monday by Florida Education Commissioner Richard Corcoran puts the onus on schools to reopen for in-person teaching in the upcoming term and establishes requirements for remote learning. Local health officials can override the commissioner’s directive if it is not safe to open schools due to COVID-19, but Monday’s announcement makes it clear that districts have to prepare to open their doors.

“All school boards and charter school governing boards must open brick and mortar schools in August at least five days per week for all students,” the announcement said.

More on the coronavirus from USA TODAY

Where a face mask is required: Many governors are instituting or renewing orders requiring people to wear face coverings in public as cases continue to rise. Is your state on the list? See it here.

Coronavirus Watch: We have a few ways for you to stay informed. Sign up for our daily coronavirus newsletter here, and come together and share the latest information about coronavirus, coping with lifestyle changes and more by joining our Facebook group.

Where are states on reopening? Some are taking preemptive measures to postpone further phases of their reopening, while others have rolled back their phases to prevent the spread of the coronavirus. See the list.