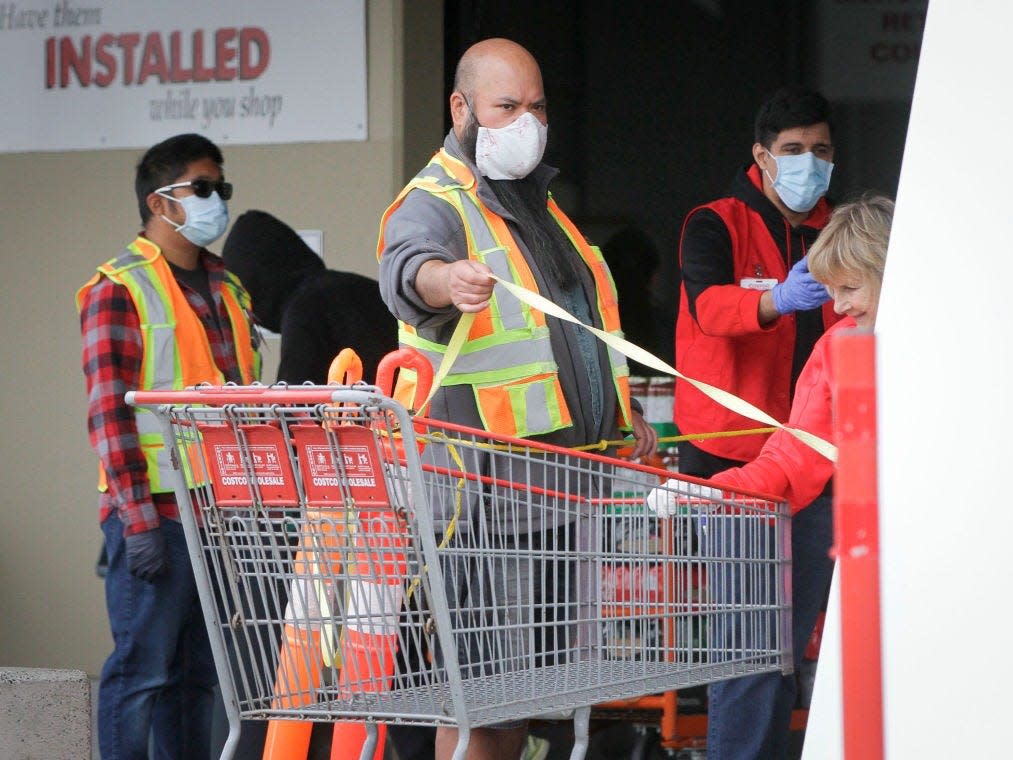 Anti-mask customers continue to cause problems at Costco.

Costco was one of the first retailers to make it mandatory for customers to wear masks, rolling out a new policy in early Mary. Two months later, it remains one of the largest companies to introduce its own mask policy, instead of simply following local orders on people wearing masks in public.

In the most recent viral video of a mask-centric confrontation at Costco, an unmasked man is shown yelling at another customer in Fort Myers, Florida. The customer — who is filming the interaction — apparently had asked the unmasked man to wear a mask. The unmasked man responds that he is being harassed.

“I feel threatened,” the unmasked man screams at the customer filming the interaction.

“Back the f— up, put your f—ing phone down,” the unmasked man yells, advancing towards the customer filming the interaction.

Another video that was posted online last week showed a woman refusing to put on her mask at a Costco warehouse in Oregon.

When asked by an employee to put on her mask — which is dangling from her ear — the customer demands to speak with the worker’s boss. The employee tells her that her boss will also require she wears a mask, but that he will speak with her outside.

The woman sits on the floor in protest and refuses to move.

In May, a video in which a Costco employee demands a customer put on a mask went viral as people applauded the worker’s reaction to the customer’s refusal.

“I’m not doing it, because I woke up in a free country,” the customer says.

The employee calmly takes away the customer’s shopping cart, telling him he needs to leave the Costco warehouse.

Costco was prepared for some pushback when it announced shoppers would be required to wear face coverings in stores, starting on May 4. The policy does not apply to children under the age of two and people who have medical conditions that do not allow them to wear masks.

“We know some members may find this inconvenient or objectionable, but under the circumstances we believe the added safety is worth any inconvenience,” Costco CEO Craig Jelinek said in a statement. “This is not simply a matter of personal choice; a face covering protects not just the wearer, but others too.”

Costco’s policy sparked immediate backlash on social media. However, that backlash was followed by an outpouring of support from people applauding Costco for requiring shoppers to wear masks in stores.

According to Pew Research, 65% of US adults said that they wore a mask in stores most or all of the time when surveyed in early June. Only 7% said that they never wore masks in these types of businesses.

While most people say they are wearing masks the majority of the time, the topic has become politicized in recent weeks. Some 76% of Democrats and those who lean Democratic said they personally wore a mask all or most of the time in the last month, according to the Pew survey, compared to 53% of Republicans.

Painting masks as a partisan question runs counter to the growing body of research that indicates face coverings can be crucial in stopping the coronavirus from spreading. Business Insider’s Aria Bendix reports that a University of Washington model predicted that, if 95% of the US population wore face masks in public, it could prevent roughly 33,000 deaths linked to COVID-19.

At Costco, as well as other restaurants and retailers, the burden of enforcing mask policies often falls on employees.

A recent viral video showed a shopper ransacking a rack of masks at Target in Arizona until two employees intervened. Grocery store workers say they are afraid to ask customers to wear masks out of fear of violent reactions. And, a Family Dollar security guard was shot and killed in Michigan after attempting to enforce the state’s mask requirement.

In late June, a 19-year-old McDonald’s worker in California was assaulted by a customer after she asked him to wear a mask. An anti-mask customer shot a Waffle House cook in May. After staff faced harassment, some restaurants have decided to shut dining rooms back down to protect workers.

Read more: A 19-year-old McDonald’s worker was assaulted after asking a customer to wear a mask, revealing a growing crisis in the restaurant industry

“In 30-plus years of studying retail and crisis situations, we have never seen a situation of customers being so rude to hourly employees,” Larry Barton, a professor of crisis management and public safety at the University of Central Florida, told Business Insider’s Mary Hanbury in May.