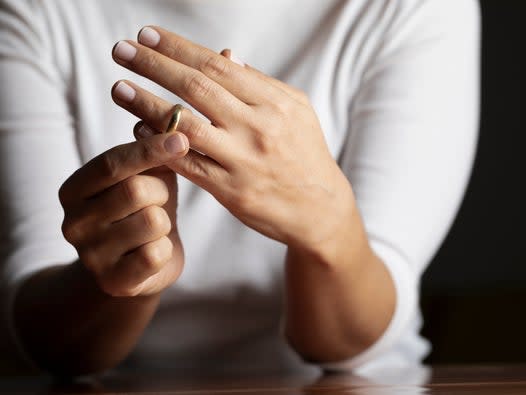 The coronavirus pandemic could lead to married couples who were previously considering divorce to delay proceedings, a survey has suggested.

In April, YouGov carried out a poll of more than 1,000 adults across the UK who had previously been divorced.

The participants were asked whether the virus outbreak would influence their decision to divorce their partner.

Of the respondents, 28 per cent said they would be less likely to pursue divorce due to the Covid-19 crisis.

A small percentage (6 per cent) said that the pandemic would make them feel more inclined to go through divorce proceedings, while the rest said it would either not be a factor in their decision or they did not know if it would be.

The survey of 1,005 adults, which was conducted for family law firm Ampla Finance, also find a marked difference between the way in which women and men felt the pandemic would affect their decision to go through divorce.

Of the women who took part in the poll, 8 per cent said they would be more likely to start divorce proceedings, in comparison to 3 per cent of the men.

Furthermore, just under a third of the men said they would be less likely to separate from their partner during the pandemic, in comparison to a quarter of the women.

More than a third of the respondents who were from the East Midlands said they would be less likely to seek divorce during the pandemic, while just over a fifth of participants from the West Midlands and Yorkshire and the Humber said the same.

Fraser Wright, who runs the Family Online Mediation and Arbitration Service, expressed concern over the survey’s results, stating that delaying divorce could lead to “more problems int he future”.

Mr Wright said that the poll’s findings showed a “genuine lack of knowledge and understanding about using an alternative to courts”.

“It’s also worrying [that] couples are delaying divorce proceedings because of Covid which can cause more problems in the future,” he said.

In June, MPs backed a new “no-fault divorce” bill for England and Wales, which will allow a person seeking a divorce to do so by simply stating that their relationship is no longer working, as opposed to placing blame.

It is believed that the “Divorce, Dissolution and Separation Bill” will come into effect in autumn 2021.

We never cancelled our 4 July wedding: The gamble that paid off