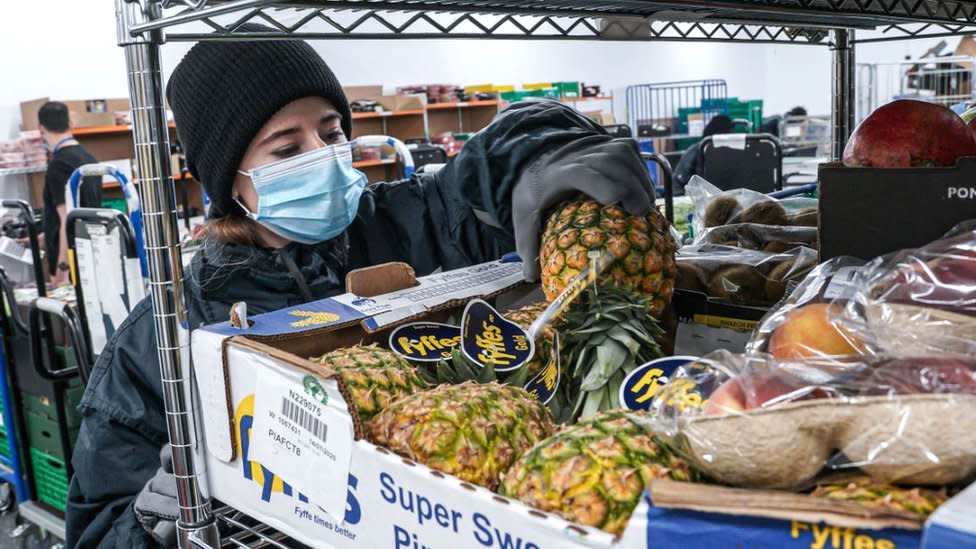 Amazon is ramping up its online grocery service with the aim of serving millions of shoppers across the UK by the end of 2020.

Online food sales have almost doubled during the pandemic with grocers struggling to keep up with demand.

Amazon is now after a bigger slice of this fast-growing market, which analysts say could increase pressure on rivals such as Ocado.

“[Amazon] can be compelling, disruptive and it’s a business with gigantic ambitions.”

Amazon Fresh offers same or next-day grocery deliveries for customers in London and parts of the Home Counties.

Shoppers have to subscribe to Amazon Prime to get it and users currently have to pay an additional monthly fee or a delivery charge per order. It has about 10,000 products including fresh, chilled and frozen food.

From Tuesday, this service will now be a free benefit to subscribers in these areas on orders above £40.

About 40 postcodes in Surrey will also have access to a faster offer, with a possible same-day delivery before midnight if you order by 21:00.

Amazon says it will roll out this quicker and unlimited free delivery grocery service to “multiple cities” by the end of this year. It’s an ambitious move.

“Grocery delivery is one of the fastest growing businesses at Amazon and we think this will be one of the most-loved Prime benefits in the UK, ” says Russell Jones, country manager of Amazon Fresh UK.

He says this expansion was on the cards before Covid-19.

“We’ve been planning this for a long time. It’s a big step up in volume. In the early days of lockdown all our capacity was being used. We’re confident that we can launch this service now at this point in time,” he says.

It launched Amazon Fresh in the UK in 2016 and has never given sales figures or customer numbers. It hasn’t even confirmed how many Amazon Prime members it has in the UK.

According to market research firm Mintel, there are 15 million subscribers, potentially giving Amazon a huge platform.

“I think they will be a big player in food retailing online. They wouldn’t be doing it otherwise. Most of the markets they go into, they want to be the biggest player,” says Richard Hyman.

“The frightening thing for everybody else is that they all really need to make money, whereas Amazon doesn’t and that places them at an enormous advantage.”

But it won’t be easy, says Thomas Brereton, retail analyst at GlobalData.

“At the moment, people don’t really consider Amazon for food. They’ve got to build brand awareness and that takes time and a lot of investment.”

“Food and non-food retailing are two very different concepts, and Amazon must be careful not to underestimate the competitiveness of the UK grocery market.”

He adds: “Also, because of what’s happening with the economy, value is going to be the main driver, which is something Tesco’s been trying to do with Aldi and its price match campaign. Amazon’s target is going to be fairly premium as it has signed a lot of deals with smaller, independent suppliers.”

A big battle for upmarket shoppers is set for the autumn. In September, Ocado will start selling M&S products instead of Waitrose food. And it’s these players, thinks Richard Hyman, who have most to worry about when it comes to Amazon’s latest move.

“Amazon are very clever at getting the rest of the market to follow their agenda and I think what they will particularly be doing is upping the ante on delivery times,” he says.

All of the established players have been rapidly building online capacity to cope with soaring demand, which many believe will be a permanent shift in shopping behaviour. Amazon’s expansion means this part of the £119bn grocery market is going to become even more competitive in the coming months.